Creative Adaptation – A Fun Example of “Outside the Box” Innovation

Customer insight, innovation and market research managers are not the only ones on the planet that seek creative ways to adapt to rapidly changing environments. So do artists, writers, performers, architects, inventors, scientists, and the like.

The latest creative adaptation we marveled about comes from the animal world…specifically, Canadian bees that live in cities (and we thought we were the only innovators!).

J. Scott MacIvor, a scientist at PCYU Lab, York University, recently reported on research on two species of city dwelling bees. These creatures are solitary nest builders (not like the social community honey bees we all know).

In the spring of 2012, MacIvor set up artificial nest boxes throughout Toronto. When he checked the boxes in the fall, he was amazed. 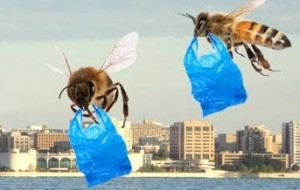 One species – Megachile rotundata – typically uses bits of leaves to build its nest. But due to environmental changes, the leaves they use are less available. To solve this problem, the bees innovated by incorporating pieces of plastic shopping bags into their nests.

The second species – Megachile campanulae — which seals the cells of its nest with less available plant resins, had adapted to change by using what they were better able to find in Toronto: plastic-based sealants, including caulk.

Quite interesting and we think an intriguing encouragement that the ability to innovate and create is not necessarily something evident every day, but is a natural trait that can be called upon when it counts.