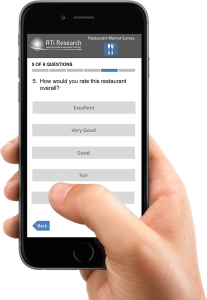 So, what does that mean for you?

It means that, in spite of dropped calls and bad transmission quality, fully 20% of all survey starts are from smartphones – a 100% increase over 12 months. In fact, the Pew Research Center has announced that it will complete 75% of its 2016 surveys via cellphones. It means that, if you aren’t yet mobile-survey-savvy, it’s time.

Mobile surveys have moved from the realm of “nice to have” to “must-have.” In addition to being an important modality for traditional surveys, mobile will create unique opportunities for future marketing research data collection. “In-the-moment” research identifies respondents in a particular point in time and asks them to record their experience. For example, a faucet manufacturer could identify shoppers looking to purchase and install their own bathroom or kitchen faucet, who are entering a Home Depot and could then follow them through their journey. Or, using mobile geofencing, respondents could be screened as they enter a particular restaurant and then surveyed to capture their experience (including photos). Data collection using both in-person interviews and follow-up mobile data collection are also an interesting possibility.

While mobile research is certainly promising, it is critical to understand how the results might be different from more traditional methods. RTi Research recently created an experimental survey to test for differences between traditional online methodology and a hybrid phone-tablet-computer approach (with quotas for each device). We found:

We also asked respondents to evaluate their survey experience: Smartphone and computer users were comparably satisfied with the experience Further, smartphone users were only half as likely as computer users to break off the survey.  And smartphone users completed the survey in an average of 12.5 minutes compared to 10.0 minutes for computer users. In summary, our experiment delivered positive results: faster completes, more representative sample, and results consistent with a traditional, computer-based online survey.

In all ways, our experiment underscores the need for marketing researchers to include smartphones in their research plans, as well as to optimize surveys for mobile. Allow respondents to complete your survey with the device of their choosing, except in those rare cases where the research plan makes it prohibitive. Marketing research adaptation of mobile-based surveying will necessitate more and better tools, as well as changes in survey questions to make the most of this opportunity.