Is Cooking Becoming a Spectator Sport? 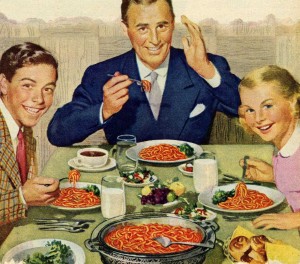 Not since Julia Child burst onto public television in 1963 with The French Chef has there been so much interest in food and cooking. That is food and cooking as entertainment.

As Lorraine Ali wrote in AdWeek: “Food-related TV programming has exploded; the mainstay stand-and-stir cooking shows are expanding and splintering into myriad permutations, from reality shows and competitions to, at last count, 11 shows just about cake and cupcakes. Culinary apps on how to braise beef or make a graham cracker crust are proliferating almost daily and a plethora of blogs leave no food need or fetish untouched.” Indeed, the statistics bear this out: 50% of American consumers watch shows about cooking very often or occasionally.

But, somehow, this trend is not reflected in activity in the average U.S. kitchen.

Michael Pollan, the well-known food writer, has called the transformation of cooking “from something you do to something you watch.” Reasons for the decline in cooking include lack of time (resulting from more households with two working adults), more options for eating out (1MM+ restaurant locations and growing), and fewer opportunities for families to eat together (46% of adult eating occasions happen alone).

Unfortunately, eating meals out has frequently been linked in research to consuming too many calories, too much sodium and sugar, and fewer fresh fruits and vegetables – clearly at odds with healthy lifestyles.

But all is not lost! There are signs that the trend may be slowing, if not reversing. Research by the Institute of Food Technologists finds that Americans prepare a meal five evenings a week with a surprisingly tight range from Millennials (4.5) to Boomers (5.1).

Businesses are already stepping up to the plate with options to solve this dilemma. More supermarkets are offering freshly prepared meals, salad bars, and other “quick meal” options. Companies like HelloFresh and Plated are making meal preparation more fun and easier by delivering boxes of fresh ingredients, pre-measured and ready for meal preparation. And of course, the internet teems with meal planning, shopping, cooking and recipe apps purporting to make cooking easier

Conflict cries out for resolution so that we can expect further innovation in the food and cooking space. Especially as Americans take responsibility for the state of their health and healthy eating, manufacturers and retailers should plan on being there to lead the way to faster, easier and better home cooking.