Lessons Learned From the Front Lines of Innovation

Creating real breakthrough innovation has long been held to be more about luck than anything else. Not a very comforting premise to those of us in the innovation business. So, we were pleased when a recent client engagement served to debunk that myth and demonstrated that breakthrough innovation can be achieved – and repeatedly achieved – if the barriers that block both creativity and decision making are altered fundamentally. Here’s what we found and presented at the Quirk’s Event in March 2017.

As you might guess, a key barrier to achieving breakthrough innovation is time. But, not too little time; rather, too much time! We are suggesting you drastically shorten your timeframe to improve your results!

As that is completely counter intuitive, are you wondering how we came to this conclusion?

Two recent innovation efforts conducted for a long-standing client resulted in product concepts that were almost twice as impactful as other concepts generated by the same company. Seeing these results, we had to ask ourselves: “How could the same teams produce ideas that were twice as powerful as they had been able to achieve previously?” And not once, but on two different and independent projects! 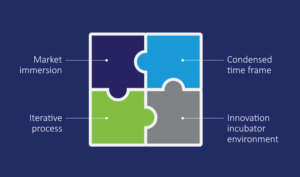 The answer was not some cutting-edge approach or “black box” magic. What both efforts had in common was a very, very short timeframe: just over a week from start to finish. That compressed time frame fundamentally changed how ideas were generated, and, as importantly, how decisions regarding those ideas were made. The compressed timeframe had, without our intent, created an environment that had profoundly changed how these teams approached innovation.

A traditional innovation effort timeline is usually measured in months. To accommodate client timetables, our process was shortened to about a week. The impact of the shortened timeline turned out to be – quite surprisingly – a critical success factor. Decision-makers and business champions were more fully involved and invested in the innovation process because it was all happening in such a small window of time. The shortened timeframe also ensured the topic and findings remained top of mind; there was no time to forget. And, in general, never underestimate the power of time pressure to get something done…there was just no time for procrastination or “kicking the can” to the next meeting.

But, as important as it was, time was just the enabler of the process – the catalyst. The drastically shortened timeline provided the pressure to ignite three other components, each one just as critical to achieving breakthrough results:

The next time you’re faced with leading an innovation effort for your organization, consider shrinking the timeline rather than elongating it over many months.  It may feel odd, and will probably be a little stressful, but without time to waste, attention and effort are focused on the greatest return, and breakthrough innovations come forth in record time.