A Story Is Not Just One Damn Thing After Another 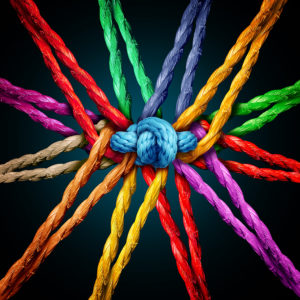 Arnold Toynbee was one of the most important scholars of the 20th century. Best-known for his monumental, 12-volume A Study of History, he’s also considered the author of this famous quip:

“Some historians hold [incorrectly] that history…is just one damned thing after another.”

For Toynbee, history is not just a series of events, but rather something that can be understood rationally, organized into patterns, driven by ideas and moving along a trajectory.

Some of Toynbee’s contemporaries made similar claims. British writer Max Plowman also argued against the “worshipping of facts…in which the ‘truth’ becomes an endless succession of stepping-stones that have a way of disappearing into the bog as soon as they are passed over.”

This critique of history as a mindless, contingent set of facts is particularly relevant to our work as market research storytellers.

Like historians, we too are presented with a series of facts, be they quantitative or qualitative data. And we too have the choice to understand these facts as merely “one damned thing after another,” or as something coherent and meaningful.

At the end of the day, what we do as market researchers is tell stories. We organize the data before us, uncover patterns and relationships, prioritize some facts over others and deliver to our clients an intelligible explanation of what’s going on and what actions can be taken to achieve a specific business objective.

This requires a certain degree of conceptual thinking. What we do, in essence, is abstract from the data a Unifying Idea that holds it all together, that converts data from “one damned thing after another” to “many things that all point to an overarching proposition.”

We are not alone in this quest to discover order within the apparent chaos of the world.

Scientists reduce natural phenomenon into theories; lawyers pull together the facts of the case into a “thesis”; journalists the “angle.”; photographers hone in on the “subject” of the image; pop composers come up with the “hook.”

The objective is to make sense of things. To translate the complex into the simple. To get to the essence of what’s really going on.  To turn data into meaning.

So How Do We Go About Telling Stories?

This process of abstracting a Unifying Idea can be challenging.

Often a data set presents a number of ideas, each of which could vie for the place of the central Unifying Idea. In this case you have to make a choice. You can decide that one of the contenders is, in fact, the most compelling or relevant idea in terms of the core business objectives. Or you can go up another level of abstraction and generate a broader idea that includes all of those in contention.

One helpful technique is to think in terms of a story at the outset of a project. As you design your research, imagine possible story titles that might frame your final report. This will help you determine the best questions to ask, of whom to ask them, and in what order.

And don’t worry that the hypotheses you develop at the beginning will bias your story at the end. Once you’ve collected your data, be open to the possibility that it will contradict whatever theories you started out with.

This is exactly how scientists work. They start with hypotheses and then test them in experiments. In some cases the experiments confirm a hypothesis, at other times they refute it, and often they add an important “wrinkle” that is hugely consequential and takes the “story” in a whole new direction.

Be a Fearless Storyteller

The important thing to remember is that your job is to listen to what your customers are trying to tell you, and then turn what you learned into a story that is easy to understand and encourages action.

You may even make a little history yourself by telling a story that turns “one damn thing after another” into meaningful recommendations that can help your business innovate and grow.

Click here to check out “From Data To Meaning,” RTi’s online storytelling course