Where’s The Beef? Technology And The Future Of Meat 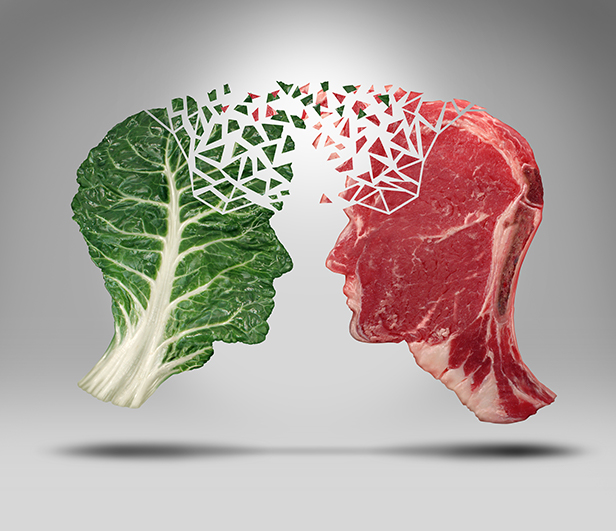 It’s hard to pinpoint who invented what came to be called the “Veggie Burger; more recently known as the “Plant-Based Burger”. But we do know that early plant-based meat substitutes were developed in the 19th century by companies like Kellogg’s at their legendary Battle Creak Sanitarium.

Another turning point came a century later. In 1981 the “Gardenburger” was developed by American Paul Wenner and served in his Gresham, Oregon vegetarian restaurant.

Four years later, spurred by the strong demand for his creation, Wenner founded Gardenburger Inc. Today, one can find Gardenburgers at more than 25,000 grocery, natural-food and club stores nationwide (ironically, the company is now owned by Kellogg). And the success of Gardenburger has spawned competitors like Sweet Earth Santa Fe Veggie Burgers, Boca All-American Flame-Grilled Veggie Burgers, and more.

These vegetable patties have been positioned as healthy, mindful alternatives to meat. They’re something for vegetarians, vegans and others pursuing an alternative lifestyle. There remains an element of the hippie and the countercultural in how they’re presented and perceived.

However, despite some penetration in the market, they’ve never gone mainstream. Restaurants have tried them with only limited success. Big chains like McDonald’s have largely discontinued veggie burger offerings due to lack of sales.

Veggie Burgers May Be Nice, But People Want Meat

Veggie burgers may indeed be healthy. They may also be delicious. But consumers want meat.

In fact, global meat consumption has increased rapidly in recent decades. Not least of all on account of the rising global middle class in countries like China.

But this comes at a terrible cost, for individuals, and for society-at-large. The health risks of long-term consumption of red meat, and especially processed meat, are well documented. But there’s an even larger concern. The production and consumption of meat overall has harmful effects on the environment, public health and the economy. Livestock production, for example, accounts for an estimated 18% of human-caused greenhouse gas emissions, producing 40 percent of the world’s methane, 65 percent of the world’s nitrous oxide and 23 percent of all water use. Moreover, excessive use of antibiotics poses a serious health risk to everyone on the planet.

Despite the obvious private and public health concerns, the demand for meat will not go away. And we’ve already seen that traditional Veggie Burgers are not the solution.

Thankfully, researchers have been developing new meat alternatives that are already rapidly taking hold in the marketplace. Unlike Veggie Burgers, these innovations are meant to taste like meat and be marketed to meat-eating customers. Rather than offer an alternative to meat, they are offering a new kind of meat.

Some of these new meats are derived from plants, but others are “lab-grown,” or “cultured.” They’re made from real animal cells grown in a food production facility which, Good Food Institute founder, Bruce Friedrich, has likened to a “kind of brewery.”

Burger King will be rolling out its meatless “Impossible Burger” nationwide, after highly successful results in test markets. Impossible Foods, the privately-held company behind the meatless burger has raised more than $750 million. Plant-based “meat” provider Beyond Meat’s stock surged after its IPO in early May, with a market cap as of this writing at nearly $6 billion.

This could be the beginning of one of the biggest consumer trends of all time.

And it’s not just meat that’s being grown in the lab. Ice cream has joined the fray and there’s no doubt that this trend will find its way increasingly into our food production universe.

The Meat Of The Matter For Market Researchers

This clearly presents an opportunity for researchers to help understand what’s going on now and how the market will shape up in the coming years.

Will there be branding opportunities throughout a category historically a commodity?

How will growing familiarity and comfort with lab-grown meatless meat affect opinions of GMO products?

Will these new companies be able to create a variety of meatless meat flavors and textures to appeal to different product varieties and market segments? If so, what would consumers be looking for?

Would consumers be interested in “meatless” varieties of chicken and pork, along with beef?

Do consumers value the communal and societal health benefits of meatless meat? Or is it just about taste and price?

There are a lot of questions to ask. And there’s a story that will unfold and will be told.

Which presents consumer researchers with an opportunity they can really sink their teeth into.